The Geographic Assimilation and Separation Processor (G.A.S.P.) has been developed by BOSInd using the technology developed by Dr Sydney Rann in his empirically-based search for the odours and chemicals present when a 'target behaviour pattern' occurs.

It can detect even the faintest trace of a target molecule and is said to be 8000% more sensitive than a dog’s nose.

Using data from our main laboratory, G.A.S.P. is programmed to scan for odours that contain molecules and compounds that share the same image current (produced by the organic compound ions cyclotroning in the presence of a constant magnetic field) as the template of our target molecules.

G.A.S.P. is capable of analysing 450m3 of air per minute* and has been successful in identifying target compounds at a dilution of 300ppm.

*Due to the enormous power of this machine, volunteers are requested not to undergo a G.A.S.P. scan whilst wearing loose clothing, jewellery or toupees.

G.A.S.P. measures mass by detecting the image current produced by the organic compound ions cyclotroning in the presence of a constant magnetic field. Instead of measuring the deflection of ions with a detector such as an electron multiplier, the ions are injected into a Penning trap (a static electric/magnetic ion trap) where they effectively form part of a circuit. Detectors at fixed positions in space measure the electrical signal of ions which pass near them over time, producing a periodic signal. Since the frequency of an ion's cycling is determined by its mass to charge ratio, this can be deconvoluted by performing a Fourier transform on the signal.

G.A.S.P. has the advantage of high sensitivity (since each ion is "counted" more than once) and much higher resolution and thus precision.

The simplicity of Dr Rann’s vision was breathtaking.

Naturally over the years miniaturisation has meant that today BOSInd technicians can even use hand-held combination  out into the field. 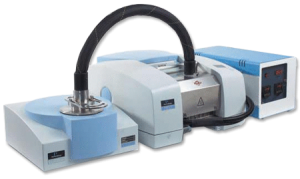